Vietnam: The Secret Agent delivers the authoritative account of the history and troubling legacy of Agent Orange. Like the herbicide itself, this work raises more questions than it answers, which is precisely the point.
— David Zierler, Ph.D., Office of the Historian, U.S. Department of State

Dioxin, a compound found in Agent Orange, is recognized as the most toxic man-made chemical. We dumped it on Vietnam and we dumped it on the dusty backroads of Southern Missouri.

Vietnam: The Secret Agent is the first comprehensive look at the history, the effects and the implications of the deadly contaminant 2,4,5-T — a main ingredient of the defoliant code-named Agent Orange during the Vietnam War. Using rare archival and striking war footage in support of interviews with veterans, scientists, attorneys and representatives of the U.S. Air Force, the VA and Dow Chemical — this film documents the history of chemical warfare and the plight of our Vietnam vets.

Every issue raised in the film continues to resonate in today's political climate. As soldiers return from Iraq and Afghanistan, plagued by illness, disability and post-traumatic stress, as Americans — particularly students — question political decisions, it's critical to learn from past conflicts.

Here is a selection of some of the bonus material available on the newly released DVD of Vietnam: The Secret Agent. The wartime use of the herbicide Agent Orange in Vietnam continues to be a serious health problem both in the U.S. and Vietnam.

Mokie Porter of Vietnam Veterans of America and VVA families discuss the ongoing effects of Agent Orange on their children and possibly grandchildren.

War photographer Philip Jones Griffiths discusses his observations of dioxin (Agent Orange) exposure in Vietnam, months before his own death from cancer.

The Agent Orange historic timeline describes principal national and international judicial, legislative and scientific events that have occurred since the release of Vietnam: The Secret Agent in 1984. It is an excellent study tool to use when screening the film. 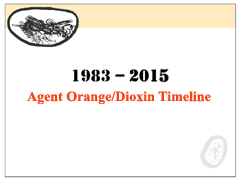